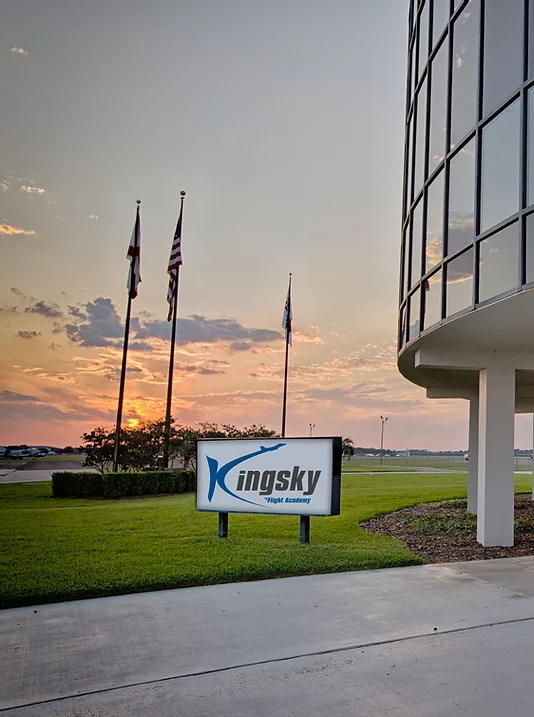 To rise to a challenge

To launch a career, travel for business, or to experience the freedom and exhilaration of seeing the world from above. Whatever your reason for learning to fly, your flight training journey must start at Kingsky Flight Academy.

With over 60 years of experience in the aviation industry, we can guide you through every process in your journey of becoming a pilot.

Our school is owned and operated by two airline captains; they bring with them all of their experience from the airlines to always strive for the highest standards of safety and quality in training. For this reason, we are proud to say that we are an accident free school and have one of the highest pass rates in the flight training industry.

sunny Lakeland, Florida, with over 300+ sunny days a year, it is the perfect place for flight training.

“Built with professionalism, responsibility and love for aviation, Kingsky exists to train pilots with the FAA’s highest standards of training and safety.

Started his career at Embraer as a test pilot and engineer. After, was hired by TAM air taxi as a Captain on the Cessna 402 aircraft. The company, soon after turned into TAM Airlines, where Capt. Isaac Kelmann became both Embraer 110 and Fokker 27 Captain, Instructor and Check airman. After 10 years with TAM, he was hired by Transbrasil Airlines to fly as a first officer on Boeing 727-100, and after a few years moved to the Boeing 767.
​Nowadays, Capt. Kelmann teaches at PAN AM FLIGHT ACADEMY and BOEING TRAINING CENTER as a simulator instructor.

Completed his pilot training in the United States of America in late 90’s. After successfully completing his Commercial pilot’s license with Instrument and Multi-engine rating, Capt. Mauricio started his career in the corporate aviation, flying turbo-props (King air B200) and business jets (HS125-700, Falcon 900EX).
Mauricio also worked for a well-known flight simulator company for 5 years. Graduated in Business administration in 2002 in a University in Florida. Joined the Airlines in 2004 as a first officer and after 6000 hours as a B737 NG first officer, upgraded to Captain, where he adds up more than 16 years in the same airline.

We’d love to hear from you

“Flying for the airlines for so many years, have taught us the importance of quality training and the highest standards of safety. For this reason, our values will always have Safety coming in first place.”